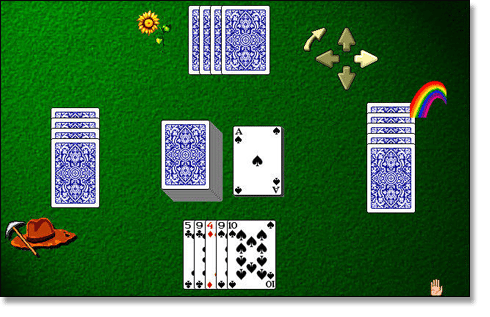 If you’re new to Crazy Eights, it is a similar game to UNO, except it’s played with a standard deck of playing cards. Many other games such as Swedish Gin Rummy and Spoons have originated from Crazy Eights as well. It’s unclear where or how the game itself was developed, but it has been around since at least the 1940s.

The aim of the game is to be the first player to successfully discard all cards onto the playing pile, of course abiding by all the rules of Crazy Eights in the process. Whoever wins the round in Crazy Eights collects points from the cards left in the other players’ hands when they finish. The player with the most points at the end of the round wins.

How to Play Crazy Eights

Here is a step by step guide to how to deal and play out the card game:

1. Deal eight cards to each player. Place what remains of the deck of cards face down in the centre of play and turn over one card so it’s facing up. The upwards card will begin the discard pile.

2. The player to the left of the dealer gets to have their go first. To discard a card, the player must be able to match the card at the top of the pile by rank or suit, or play an Eight (similar to a Wild in UNO). If the top card is a Four of Diamonds for example, the player can do any one of the following:

3. If a player can’t match the card at the top of the discard pile on their turn, they must pick up a card from the turned over stack of cards until they can discard a card of theirs (if the face-down stack runs out of cards, a player who can’t put down a card simply passes their turn).

4. If a player chooses to discard and Eight at any time, they must also choose a new suit the next player must follow. If the following player can’t put down the chosen suit, he/she must pick up from the stack of cards.

5. Note: If you are playing with Jokers: the Joker acts as a blank card and the next player to have his or her turn can play any card on top of the Joker.

6.Once a player has successfully unloaded all cards, it’s time to total up the cards in the other players’ hands. The winner accrues all other player point.

How To Score In Crazy Eights

When you add up won points in Crazy Eights, not all cards have the same value. Here’s how the points are scored:

Where to Play Crazy Eights Online

Crazy Eights is a great game to play in real life as all you need is some other players and a deck of cards. However, if you prefer to play it online there are several sites where you can play Crazy Eights for free.

Other card games people search for when looking to play Crazy Eights include:

All information detailed above is intended for international audiences only. Australians cannot legally play online card games as of September, 2017.