All online casino games come with rule variations, even the pokies. While all pokies may sound similar, there’s a number of different types which will effect gameplay. From the Ways to Win format, to the bonus features available – we take a look at the types of video poker machines you can find when playing on the Internet. This guide is for our international readers only – for Australians it is purely for informational purposes, as online gambling is prohibited under the Interactive Gambling Amendment Bill 2016, effective as of September 2017.

We all know the difference between classic pokies and video poker machines. In summary, classics offer one to three rows with a small number of paylines and little to no bonus rounds, while video poker machines offer five-reels, multiple pay lines, unique bonus features and engaging animation.

But there’s more to pokies than just the differing attributes of classic and modern pokies.

A majority of all pokie machines feature three rows, unless it’s a classic title which offers just one row. Thanks to innovative video pokies, players can now find online titles with five reels and four rows, offering more symbols and more chances to win – as software providers get more creative with their pokies.

Net Entertainment’s popular game Spinata Grande is a four-reel title which you can try out at G’day Casino.

Number of reels on pokies

You probably already know paylines on pokies vary, but for those who don’t, you can find titles with as little as one payline and as many as 100 paylines. You can also play titles with fixed paylines, where you have to play all paylines, or titles where you can customise a minimum of one or the maximum number available – which could be 15, 20, 25 or more. 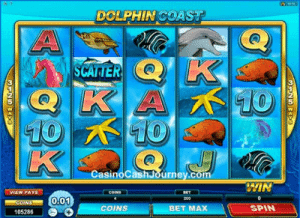 Dolphin Coast – a 3125 Ways pokies game by Microgaming[/caption]Ways to win titles scrap pay lines entirely, allowing you to win across a large number of winning combinations during every single spin. You can only find this format on modern pokies – classic fruit machines don’t offer the ways to win option. The number of ways you can win ranges from 243 ways to 3125 ways.

Progressives can take the format of any of the aforementioned titles – payline pokies, classic fruit machines, etc., but what makes these titles different is the addition of one or more jackpots which grow every time a player places a real money wager on the same game within a linked network.

A percentage of the wager is taken and placed in the prize pool, which grows until it goes off. Players can find titles starting at three to four figures, five to six figures, and even seven to eight figures such as Microgaming’s Mega Moolah. Mega Moolah has a base jackpot starting at one-million-dollars, and has created many instant multi-millionaires over the years.

The jackpot can be won randomly – triggered without the need of a certain minimum bet – or players may have to play the maximum bet and trigger a bonus feature.

Different type of bonuses on pokies

The bonuses available in online pokies can differ between titles, which should be considered before playing to get the most out of gameplay. Bonus features not only add more excitement and suspense to each spin, but can dramatically boost your winning potential.

Wilds generally perform the function of substituting for every symbols, except scatter symbols, to complete a winning payline. They can also sometimes perform special functions of their own to offer big wins.

These functions can include Running Wilds, where symbols run across the screen leaving multiple wild symbols in their place; Stacked Wilds which can cover an entire reel; Expanding Wilds which expand across the reels to create big payouts; and Sticky Wilds which see the wild symbol held in place for a set number of spins. 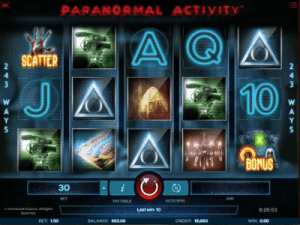 Free spins in the Paranormal Activity pokies game[/caption]Free Spins features are found on most five-reel pokies titles by reputable providers and are generally the main appeal to Internet pokies. A set amount of free rounds can be triggered – usually by spinning at least three scatter symbols, but they can be activated in other ways – and here a number of games are played for free.

Some providers offer additional features to enhance the free spins, including wild functions and multipliers. Additionally players may be able to trigger additional free spins by spinning extra scatters during the Free Spins feature.

Similarly to free spins, bonus features see additional rounds where players receive payouts – usually for free. These can be in addition to free spins features or standalone features to the online pokie.

Multipliers see a number applied to a payout to increase the win, and can be applied in the base game, after consecutive wins, or during free spins or any other bonus round.

Click Me bonuses see players clicking on symbols to reveal a payout and these types of bonuses can be triggered randomly or by spinning a certain number of bonus symbols. Players can sometimes click to win coin payouts or a certain number of free spins with a multiplier too.

Rolling Reels sees the reels spin and on a win, the winning symbols explode so new ones can replace them offering another chance at a win. This feature can also be called Cascading Reels or Avalanche Reels depending on the provider and how the feature plays out.

Re-Spins are similar to free spins as the reels spin a certain number of times without costing you a cent. This can happen after spinning a certain symbol combination or after a win. Multipliers can also be applied if consecutive wins have taken place. Re-Spins usually occur for free but can cost depending on the title.

Nudges are generally only available on the classic fruit machines and see the player nudging the reels so a symbol or symbols moves into a new position, potentially creating a winning combination.

Multi-Level Bonus features are perfect for the player who has been spinning the reels for a while and want a new level of entertainment. They mirror video games as you have to complete certain requirements, such as spinning three scatter symbols a number of times, to unlock the next level of the bonus. The features can also be Click Me bonuses which will get you to the next level unless you click the ‘end of the bonus’ symbol – Microgaming’s Hellboy is a great example of this type of multi-level bonus available at Casino-Mate Casino.
Give online pokies at go at Casino-Mate where you can try games for free in practice mode to get an idea of the different types of pokies available. If you decide to play for real money, Casino-Mate will match the amount of your first deposit by 100%, with up to $1400 in bonus money available all up.