Hearts traces its lineage back to the early 17th century, but you probably know it best as “that other card game that used to come pre-loaded on Microsoft Windows”. This how-to guide will explain all the rules and give you the tips, tricks and tools you need to show Ben, Michele and Pauline a thing or two.

Hearts is thought to have spawned from a branch of European card games called Reversis, of which there are records dating back as early as 1601. A popular betting game in France, Italy and Spain throughout the 18th and 19th centuries, the aim of Reversis was to avoid winning tricks in an effort to achieve the lowest score possible. Players scored a point for every trick won and incurred additional penalties for taking the Jack or Queen of Hearts.

The rules and complexities of Reversis evolved over time until the earliest versions of what we now call Hearts appeared around 1850. Then came Black Maria, which introduced the Queen of Spades penalty that has since become a staple of standard Hearts play. Shooting the moon, passing cards, breaking Hearts and other rule variations have been tacked on over the course of the 19th and 20th centuries to form the game of Hearts as we know it today.

Another school of thought suggests that Hearts originated from an English card game called Losing Lodam, in which the top five cards in each suit (Ace, 10, King, Queen and Jack, in that order) had the power to “load” a trick with a certain number of penalty points (e.g. Ace = 11 points). Records of this game date back to 1621 and reference an earlier French game known as Coquimbert.

How to play Hearts

Hearts is a trick-avoidance game where the aim is to score as few points as possible. It is played with a standard 52-card French deck and usually features four players, although some variants cater for between three and six participants.

In a standard four-player game, the deck is dealt out in full so that each player receives 13 cards. The rules of dealing can vary significantly depending on the number of players involved, but here we will stick to an old-fashioned game with only four players. 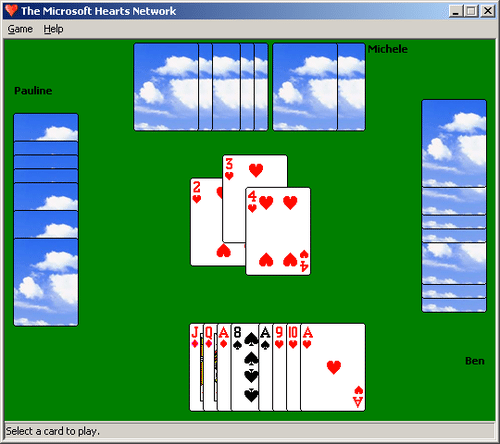 Those who have played the Microsoft Hearts game may recall that each player was required to choose two cards to pass to a specified opponent at the start of each hand. This isn’t part of traditional play, but the worldwide popularity of the Windows OS version has seen card passing become a standard feature in both offline and online Hearts games. The standard passing pattern goes like so: left, right, across, no pass, repeat.

The run of play in Hearts follows much the same pattern as other trick-taking games such as euchre. The player to the dealer’s left plays the first card, which determines the suit which all other players must attempt to follow (e.g. if the first player puts down Five of Diamonds, the second player must play Diamonds). If a player does not have any cards in the lead suit, they can throw down any card they like – including penalty cards.

In Microsoft Windows Hearts, whichever player holds the Two of Clubs must lead the first trick with that card. Another common rule variation forbids players for leading with Hearts until a Heart (sometimes any penalty card, including Queen of Spades) has been discarded on top of a different lead suit.

When each player has put down a card, whomever played the highest-value card ‘wins’ the trick. Every Heart taken in a trick scores one point, while the Queen of Spades incurs a 13-point penalty. Thus, there are 26 points to be doled out per hand (13 Hearts + Queen of Spades). Whomever wins a trick is required to lead the next trick. When at least one player reaches 100 points, the game is over and the person with lowest total score is declared the winner.

The aim of Hearts is get rid of all your points-scoring and high-ranking cards without winning any tricks. There are several tactics a player might employ to this effect.

A void occurs when a player does not have any cards in a particular suit. This means a player cannot win any points when that suit is led, thus creating opportunities to offload penalty cards onto other players without risk.

When passing rules are in play, most players will look to do two things: get rid of penalty cards and create a void in their own hand. The Ace and King of Spades should always be passed on because they reduce the chance of being stung with the Queen of Spades, as should any high-ranked Hearts. As you don’t want to be left without any Hearts or Spades of low rank (called ‘padding’), Clubs and Diamonds are the ideal suits in which to fashion voids.

When you don’t have the highest-ranked cards of a suit, the chances are good that someone else will take the trick. As such, it’s a good idea to play Spades as often as possible when you don’t have the Queen, King, or Ace of that suit, as it creates opportunities for one of your opponents to cop the 13-point Black Lady penalty.

Shooting the moon in Hearts

Modern Hearts games often include a special mode of play called ‘shooting the moon’ which rewards a player for taking every single trick and winning all 26 points in a hand. This high-risk, high-payoff strategy should only be attempted when you have a lot of high cards and a big run in a single suit, as you can only pull it off if you keep the lead throughout the hand.

The exact scoring system for shooting the moon rules can vary from game to game. Common interpretations include: 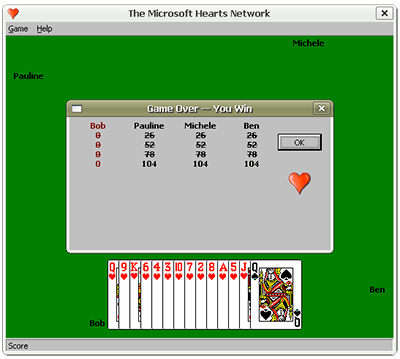 Half moon: The shooter scores zero points for the hand; all other players incur a penalty of 13 points each.

New moon: The shooter scores zero points for the hand; all other players incur a penalty of 26 points each.

Old moon: The shooter deducts 26 points from their overall score; all other players incur no penalty score.

Shooting the sun: The shooter scores zero points for the hand; all other players incur a penalty of 52 points.

Cleaning the slate: The shooter’s total score for the game resets to zero points; all other players remain on the same score.

While the rules of Hearts are custom made for a four-player game, there are a number of quick tricks you can use to modify the deck and the deal when playing at home with three, five, six, or even more people.

Three players: When there are only three people playing, the Two of Diamonds are taken out of the deck and each player receives 17 cards.

Five players: When there are five people playing, the Two of each suit (or sometimes only the Two of Diamonds and the Two of Clubs) is removed and each player takes 10 cards.

Three Jokers: Another variation for a five-player game is to add three Jokers and deal 11 cards to each player. Jokers in Hearts typically act as valueless wild cards that cannot win tricks and can be used in any suit.

Six or more players: With six people, two zero-point Jokers are added and each player takes nine cards. If there are more than six players, two decks may be used with certain cards removed to ensure a balanced deal.

Other names for Hearts card games