Donkey is a particularly fun game to play for the younger people in your party or family because the rules are not overly complex, there is chanting involved, as well as inevitable giggles, and the game often goes to that person who is the most observant and has the quickest hands.

There is no winner in Donkey, or more accurately everyone wins in Donkey except for one player, and the object of the game is to not be that player. You do not want to be the Donkey. 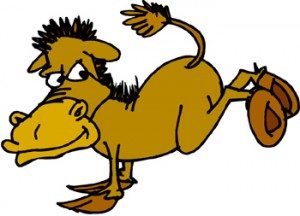 In order to play Donkey, you will need the deck of cards, some tokens, and a tray (this is optional). The tokens can be anything, so long as they are easy to grab. The version of this game played in the United States is called Spoons because they use spoons as their tokens, but you can use coins, poker chips, or even more exciting for the younger players, candy canes or chocolates.

You want to have the same amount of tokens as you have players, but minus 1. Donkey is best played with 3-5 players, but so long as you have a big enough playing space where everyone can reach the tokens equally, you can play with as many players as you like. For example, if you have 6 players then you will need 5 tokens.

Another optional piece of equipment is a plate or tray that you can set in the middle of all of your players and put the tokens on this tray. Make sure that everyone has an equal chance to reach the tokens but that the tray is not so close that it gets too congested when players are simultaneously reaching for the tokens. Also it is probably a good idea to use something sturdy in case the tray gets knocked over. This is the kind of game that gets raucous, so accidents can happen.

One more aspect of the deck is that the cards should have as many completed 4 of the same rank as you can muster (all four Kings, all four 7’s, etc.). In the example above, using a deck of 31, you should have 7 sets of 4, for a total of 28 cards with 3 left over.

Once you have your players, your deck, your tokens, and a good playing space and tray, you are ready to go.

You may choose a dealer at random using any method you like. One tried and true method is to have every player pick a card and the dealer is the one with the highest card.

The dealer then shuffles the cards and deals out five cards to each player, who can take a look at their cards. You can do this either by dealing 5 cards at a time to the player on your left, and then the next player on the left and so on. Another option is to deal one card out to each player at a time, dealing clockwise (to the left) and repeating until every player has 5 cards. You will have 1 card left over. Make sure nobody looks at this card, including the dealer, and set the card to the side face down.

Each player can hold their cards in front of them, fanned out so only they can see them. It helps to sort the cards by matching the same ranks together. Any threes you are holding go together, for example.

Before starting to play the game, make sure everything is set up and everyone is ready.

If you are hosting this game, get ready for it to get loud and boisterous. Once everyone has indicated they are ready to begin, have all the players chant rhythmically “Pass, two, three, four” and repeat this phrase over and over.

Alternatively, you can choose one player to chant the phrase. The trick is to not go too fast that players cannot keep up, but not to go too slow either. Whenever the players say “Pass,” each player must pass a card to the player on their RIGHT (note this is counter-clockwise and the opposite direction from which most card games are played).

Players keep chanting and passing cards until they complete a winning hand or notice that someone else has already done so. A winning hand will consist of four of the same rank, plus the one additional card.

If you have a winning hand, you do not have to announce it in any way other than by grabbing one of the tokens. In fact, the game is more fun when you try to grab the token in as sneaky away as possible so that no one else notices and then continue to play by passing the one unmatched card to the right with everyone else.

If you have grabbed a token after the first player has done so, you can also continue chanting and passing a card along so that the other players do not notice. Once all the tokens have been grabbed, one player will be left out. On a list of all the player’s names, a ‘D’ is written next to the odd player out, and a new hand begins.

After each hand, the odd player out gets letters from the word D-O-N-K-E-Y added to her or his name. Once one of the players has lost six hands and spelt out the word DONKEY, the game ends. Everyone can eat the tokens (if they are the edible kind) and you may even give one to the Donkey, so he or she does not feel left out.

One thought on “Donkey”