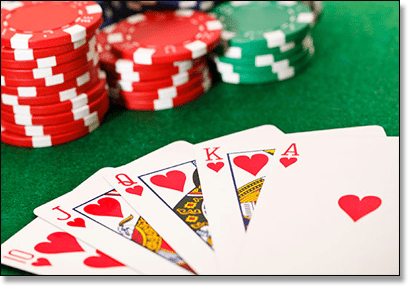 Poker can be a card game that seems complex to the untrained player, but is actually straight forward once you get the gist. Most players pick up this beloved game easily and can’t wait to learn the many variations. There is a reason why poker is largely considered the world’s favourite card game; it’s fun, exciting and requires the perfect blend of luck and strategy. In order to get your head around poker, it’ll help to understand these basic terms generally found in all variations of the game, along with the ample diverse variations.

Betting is made in poker using chips valued at certain amounts, with all chips placed in the middle of the table to become the pot. The first player to place his/her bet will be dependent on the variation of poker being played, and once the first bet is placed betting moves clockwise around the table. Once players have examined their hand and their turn to bet comes, they have a number of choices on how to proceed:

The way each game is dealt will vary significantly depending on the version of poker you are playing. Deals refer to the distribution of cards to each player in accordance with the rules of the game in play.

Playing Poker Against Dealer/Computer and Against Other Players

Each game of poker entails different rules, which will either comprise of playing against other players, or playing directly against the dealer. Put simply, this means:

Poker against other people – players compete against other competitors around the table, with the aim to beat others with the best hand or cunning tactics.

There are more variations to the game of poker than grains of sand on earth, but some of the most popular variations – ones found both offline and online – are detailed below:

Texas Hold’em is the mother of all poker variations and the most common and popular form of poker played today. In this variant, players use two hole cards and five community cards to make up the best-ranking hand possible.

Omaha loosely follows the structure of Texas Hold’em, with players using three community cards out of five, and two hole cards out of four to make up the best-ranking hand possible.

There are numerous variations of Stud Poker, the most popular variant being Seven Card Stud and Five Card Stud, with the general aim being for players to make the best possible hand using face-up and face-down cards that are dealt throughout the game. Several betting rounds take place per deal.

H.O.R.S.E is a combination of five different variations of poker; Texas Hold’em, Omaha, Razz, Seven Card Stud and Eight or Better (the acronyms of which make up the name of the game). During a game of H.O.R.S.E, each round of play rotates between each of these poker game variations. H.O.R.S.E adopts the rules of each of the poker variants mentioned above, so an understanding of each of these games is required. This game is known to be the best way for players to display their genuine poker skills, as players need to be able to demonstrate knowledge and performance over a range of poker variations.

This is fast becoming one of pokers most popular variants, and is found at all our endorsed online casinos, as well as land-based casinos around Australia. With a simple structure and fast-paced game-style, 3 card poker stipulates three cards are dealt to each active player, and three cards dealt to the dealer. Players bet an Ante to receive cards, and once they’ve checked their hand, they have the option to place a Play wager if they wish to continue (and think they’ll better the dealer’s hand). Side best such as Pairs Plus are available, too. Players are in competition against the dealer.

With so many variations on traditional poker, players have the opportunity to explore different rules and formats to find the game most suited to their personal tastes. When it comes to poker there really is something for everyone, with online variations offering a range of titles, all with great graphics, sounds and live interaction options to keep players entertained for hours – for international players only, of course. Australians can’t legally play online for real money after September 2017 due to the new Interactive Gambling Amendment Bill 2016 now in full effect.