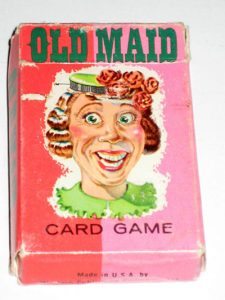 Old maid is a classic Victorian card game, blending after-work camaraderie with a simple game of cards. Typically, the game’s etiquette says the loser has to pay for drinks, although this rule isn’t set in stone: it could just be that the loser can no longer win the pot, or is forced to add more money to the pot. Sometimes a little physical punishment could be in order! Spawning elements of bluffing that are seen in most card games and in particularly poker, old maid is a fun and simple game that anyone can play.

You can purchase old man card decks from certain speciality stores, although in most cases a standard deck of 52 playing cars will do the trick. The primary objective is to avoid being left with the only lone card in the deck. The player left with the unmatchable card at the end of a match is the loser.

There are a number of ways to establish which card is the unmatchable card. Generally, you should remove the ace of clubs or queen clubs, or add a single joker. The card that is unmatchable is called the “old maid”.

Each game of old main has one dealer. They deal all of the cards to players, trying to distribute them evenly, although it doesn’t really matter if some players have an extra card. Once all of the cards have been dealt, each player must discard any pairs — but not trios — that they have in their hand, face down. Matched cards include match suit colours, meaning a spade can only be matched with a club of the same number, or a diamond with a heart of the same number.

Once each player has removed their pairs, starting with the dealer each player must take turns offering their hand face-down to the person to their left. This person must select one card from that deck and add it to their deck. If the new card makes an additional pair, that pair must be discarded immediately.

Eventually, all pairs will be matched, and one player will be left with a single unmatched able card. “Stuck with the old maid”.