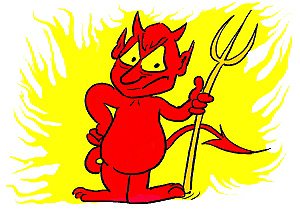 Some of the more politically correct may prefer one of the variant names for this trick taking card game, such as Oh Pshaw, Oh Well, or Up and Down the River, but for everyone else, Oh Hell sufficiently captures the emotions which can change quickly in this up and down game. Unlike other trick taking games, the object of Oh Hell is to take the exact number of tricks you bid, no more and no less.

The Deck and the Deal:

When playing with five or fewer players, the standard 52 card deck works best. In this game the ranking of the cards is conventional with an Ace being the highest card and a 2 being the lowest and all other cards ranked in order.

When playing with six or more players, using two 52 card decks for a total of 104 cards or a specialized 500 deck which has 63 total cards.

The deal and play of the game proceeds clockwise, with players determining the initial deal by each drawing a card and the player with the highest card ends up being the initial dealer. You will also want to determine beforehand the score keeper, method of keeping score, and the number of hands you will play since Oh Hell has many variations.

The standard method of dealing has the dealer begin by dealing out 1 card to each player for the first hand. After this, the dealer turns up the first card from the remaining deck, and this determines the trump suit, which will beat any other suit when played.

After the first hand, subsequent deals will increase from 2 cards per player on the second deal, to three cards on the 3rd, on up to 13 cards on the 13th deal (which has no trump suit), if playing with exactly 4 players, and then back down to 12 cards on the 14th deal and so on until the final hand where 1 card is again dealt to each player. After this last hand, the game ends.

You have many options for how to deal aside from the standard deal listed above. One option is to begin with the maximum number of cards, 12 or 13 with four players, and deal one less card each round until you get to a deal of 1 card each, and then back up until you deal the same number of cards out to each player as you started with.

Other options have you adjusting the maximum number of cards dealt out to each player based on the number of players you have. For example,

if you have 6 players deal out 8 cards each

if you have 7 players deal out 7 cards each

The bidding phase in Oh Hell is actually simple compared to other trick taking games. After the dealer has dealt the cards out and turned over the card that determines the trump suit, each player bids how many tricks he or she will take based on the exposed trump suit beginning with the player on the dealer’s left and proceeding clockwise. Once the bid gets back to the dealer, the dealer must make a bid that either is less than or more than the total number of tricks.

The catch is you get the most points for making your bid exactly with no overtricks and no undertricks. In some scoring variants, you get no points at all if you do not make your bid exactly, but in others you actually lose points.

The Play of the Game:

You have a couple of options for how to begin play in Oh Hell. You can have the dealer play first or the person to the left of the dealer. All players must follow suit if they have that suit. If not they may play a trump card or a card from another suit. In some variants, you have to play a trump card if you do not have cards in the suit that was led, and can only play cards in a suit other than trump if you have no cards in either the suit that was led or the trump suit.

As in most trick taking card games, the highest card wins unless a trump card is played. In that case, the highest trump card wins. Play continues until all tricks have been taken. Then the score is tallied and the next hand is dealt with the appropriate number of cards.

There are numerous scoring variants. The most common way to score Oh Hell is to have each player earn 1 point for each trick they take, and earn 10 points if they make their bid exactly. In most variants the player with the most points after all hands have been played wins the game.

Another scoring variant is to score 1 point per trick to each player who makes their bid in addition to a 10 point bonus. If you do not make your bid, however, you lose the same amount of points as the number of tricks you bid. For example, if you bid 3 tricks and make your bid, you get 13 points but if you fail to make your bid, you lose 3 points from your cumulative score for all the hands played so far.

In some variations, the object is to score exactly 100 points, and if you go over, you drop back down based on the number of points you went over. For example, if the latest hand puts you over 100 by 7 points then subtract that seven from 100, giving you 93 points total.

As you can see, the game of Oh Hell allows for many different types of house rules. If you are of the persuasion that a score keeper does not have to be the most savory of persons, choose your scorekeeper carefully and keep an eye on her or him.