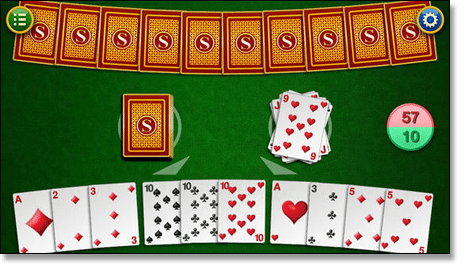 Gin Rummy is a scored card game, and as the name suggests, it’s derived from Rummy but is faster-paced and easier to score and finish than your standard Rummy.

How To Play Gin Rummy

In order to win points, a player must either ‘Knock’ to announce an end to the game, or call ‘Gin’. Once this happens, that player will be awarded points for winning the game, as well as gaining points from the ‘deadwood’ cards left in all other opponents’ hands.

The following section explains all the important terms and their definitions in the game of Gin Rummy.

Step-by-Step Guide of How to Play Gin Rummy

1. Deal ten cards to each player with the cards face down. Place the rest of the stack of cards downward and turn over the first card; this upward card will start the discard pile.

2. On a player’s turn, he or she may either pick up a card from the downward stack, or the top card from the discard pile. You’re aiming to organise your hand into either ‘runs’ or ‘sets’ so there are no ‘deadwood’ cards.

3. Before the next player can take his or her turn, the player who picked up a card must also unload a card onto the discard pile. You can only have ten cards before the next person takes his/her turn.

4. Players continue to take turns (clockwise) until someone either chooses to ‘knock’ or call ‘Gin’. Once either of these happens, it’s time to take scores.

How To Score In Gin Rummy

When a player end a round (by either ‘knocking’ or calling ‘Gin’), they are awarded points game points for winning, and also collect the deadwood points left in their opponent’s hand. Here’s how points are allocated:

Note: players can award a different bonus-point scheme, but must decide prior to starting how many points are allocated for winning hands (some players like to give a ‘Gin’ caller more bonus points).

There are many variations to Gin Rummy’s rules, and we’ve included the most popular ones below:

Where To Play Gin Rummy Online – If you want to play Gin Rummy online for free, we recommend you give BigFishGames.com RoyalGames.com a try.

If you like Gin Rummy, you’ll be sure to like the endless poker and blackjack variations at reputable online casinos such as Royal Vegas Casino, G’day Casino, Jackpot City and BetOnline. These card games also use a combination of luck and skill, and require you to utilise strategy in order to better your hand. Try playing in one of the blackjack tournaments at Royal Vegas Casino if you want a competitive card game that sets you against a real live opponent. All of these sites allow you to safely play with real money which can be won and withdrawn (AUD currency).