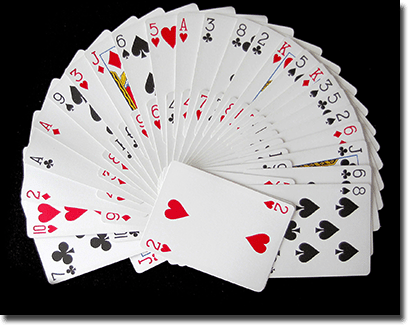 There are many well-known card games that are variants of the original rummy game, but basic rummy is a fun card game in itself and is great if you have 2 – 6 players. Rummy has been traced back to a Mexican card game that was popular in the mid 1800’s, but it is also thought to be derived from the ancient Chinese game of Mah-jong.

If you are familiar with gin rummy or Oklahoma gin, you’ll find that basic rummy is very similar. If you’re totally new, it’s quite a straightforward discard-style card game once you’ve got a handle on the objective and terminology used in rummy.

The basics of how to play rummy

To play rummy all you need is 2 – 6 players, a standard deck of 52 cards and pen and paper to keep score. In basic rummy, you’re not playing in teams; each player is playing individually and the game is scored as such. If you’re playing with more than six people playing rummy with a standard deck of cards becomes difficult, so you’re better off playing another rummy variant like contract rummy, 500 rum or double rum.

The objective of Rummy

You need to be the first player to get rid of all of your cards to win rummy. You do this by forming melds and adding your cards onto other players’ melds, or you can go out in one go by calling rummy. Once the winning player has ended the round, the scores are added from the cards left in the other players’ hands and are given to the winner.

Melding
This is when you put your cards into a sequence or set that you can discard. When you successfully meld some of your cards, you may lay them off or keep them in your hand for a rummy finish.

Sequence
This is when you have three or more cards in the same suit in a sequence. For example, a three of diamonds, a four of diamonds and a five of diamonds.

Set
This is when you have three or four cards of the same rank. For example, three sevens.

Lay Off
This is when you have a set or sequence and choose to put it down in front of you before the hand is over. This means that if another player wins, these cards are not added to their score. However, if you lay off a meld during the game you cannot have a rummy hand at the end. When you lay off you can add to your meld throughout the game and other players can also add to your meld.

How to finish a game of rummy

A game of rummy ends in one of two ways; a play either ‘goes out’ or calls ‘rummy’. Either way means the player has gotten rid of all their cards.

When a player is going out, it means they have no cards not in melds left, which means they formed their cards into melds and laid them off during the game and/or discarded some cards onto other players’ melds.

For a player to declare rummy, they can’t have laid off any melds yet, as declaring rummy is putting all your melds down in one go. Declaring rummy is a riskier move but you get the double the points for doing it so and there’s a good pay off for taking the risk. Once you’ve scored how many points need to be allocated to the winner, the round is up.

If you reach the bottom of the stack of cards you draw from before anyone has gone out or declared rummy, then reshuffle all the cards in the discard pile aside from the top card to make a new draw pile.

Step-by-step guide of how to play Rummy

If a player goes out they get all the points left in their opposing players’ hands, but any cards the other players have already laid off are not counted. The points are scored as followed:

Standard rummy is the basis for many other popular card games including; King’s Court, 500 Rum, Conquian, Contract Rummy, Gin Rummy, Indian Rummy, Shanghai Rum and many more. We detail how to play some of these fun variants on our site so have a read.

If you want to make money from playing card games and enjoy rummy we recommend international players play a blackjack or poker variant at a real money virtual casino. The online casinos we promote on this site all have all the classic casino card games and exciting variations of the usual games as well. They all also accept multiple currencies and have enticing welcome bonuses, promos and deals for new players and regulars who choose to play for real money.

For Australians, stick to playing rummy at home. Online gambling is currently banned under the new Interactive Gambling Amendment Bill 2016 which went into full effect from September 2017.