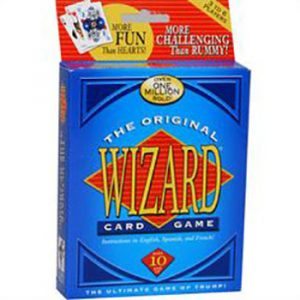 Wizard is a fun trick-taking card game for between three to six players. A deck consists of 60 cards, with a regular set of 52 playing cards, as well as 4 Wizards and 4 Jesters. These Jesters have the lowest value in the game, while the Wizards have the highest value. Wizard is the type of game anyone can play, pending they have the patience to understand the rules, probabilities, and ins-and-outs of bidding and winning. Fans of games like bridge, and even games like Briscola (which don’t use the traditional British card deck) will appreciate Wizard for its team, bidding and trick structure. It shares quite a bit in common with both games, although with some subtle differences.

How to play Wizard

The basic objective of Wizard is to bid on the number of tricks they will take in any subsequent round of play. Each correct bid rewards points, whereas points are subtracted for every incorrect bid. Once all rounds have been played – generally between 10 and 20 – the player with the most points is declared the winner.

Each game consists of three rounds: Dealing, Bidding, and Playing.

In the first round of play, players get one card each, with the number of cards increased by one with every subsequent round until all cards have been distributed. So, if you have a table of four players, you’ll end up needing to play 15 rounds in order to declare a winner.

The trump suit is determined by turning the top card of the remaining cards over to face up. However, if there are no cards left, or if a Jester is turned, then only Wizards are trumps. If a wizard is turned, the dealer must pick a trump suit for the round. 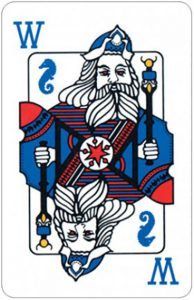 Once players familiarise themselves with their cards, they must predict how many tricks it will take, from zero up to the total number of cards dealt. This number of recorded by the dealer. Once this is done, the player to the left of the dealer must play a card, followed by all others, clockwise. If one player places a card other than a Wizard or a Jester, than other players must place a similar card and avoid those two. The Wizard card will beat all cards. If a Wizard is played as the first card, all players are free to play whatever card they want, regardless of the Wizard’s placement. If all cards in a trick are jesters, the first one beats the others, otherwise the jester is beaten by all other cards.

At the end of each round, players are given a score. If they predict the number of tricks, they receive 20 points, as well as 10 for each trick taken. Players lose 10 points for every trick over or under their predicted number of tricks.

Wizard is unique in that there is always a statistically correct bid for any given card. However, this can only apply when a player is holding one card, and if they have the lead. A correct bid of 1 will eventually earn more points over time, so long as the player is in a position to win the trick with a 42.86 percent chance. A correct bid of 1 rewards 30 points, whereas a correct bid of 0 rewards 20 points.

There are 58 unknown cards for any one player, meaning the odds of a winning hand can only be calculated next to the odds of two of the three hands losing to another player.

How to win at Wizard

When you’re playing with the lead, this is how you should bid:

If you’re playing a three-person game, always bid 1, with the Jack or stronger being the offsuit.

Where to play Wizard

Wizard is one of the more popular competitive card games outside of the casino realm, next to the likes of bridge. If you’re looking to get into the competitive scene, there are regular tournaments held year-round, with the World Championships having begun back in 2010.

Most countries receive an invitation for 2-4 players to send to the event, with competitions held in Frankfurt, Germany; Budapest, Hungary; Vienna, Austria; Amsterdam, The Netherlands; and Athens, Greece.