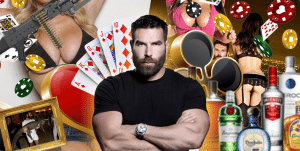 He’s been called “the most interesting man on Instagram”, but there’s a lot more to Dan Bilzerian than just glamorous (and controversial) social media posts. He plays the game (pun intended) in an era where online persona means everything, building his brand up beyond what was initially thought to be one of the most bankable names in professional poker. These days, people flock to his posts and videos – and any news story about him – simply for the outrageousness of it all. So what is it about Dan Bilzerian that makes him a household name?

A brief history of Dan Bilzerian

Dan Bilzerian is a poker player and social media star with a net worth of $150 million. He’s risen to internet A-lister in a matter of year, but you won’t believe how. While sitting in the crowd of the 2013 World Series Of Poker in Las Vegas, he can be seen in the broadcast having his beard stroked by a woman. Of course, this normally wouldn’t be cause for a double-take, but the woman does it so intently and for so long, people started to question whether she was hired by Bilzerian solely to brush his beard. Such is the craziness of the lifestyle Dan Bilzerian portrays, that the scenario is completely believable.

This was when the internet was introduced to Bilzerian, and it’s been a wild ride ever since. He was known as a high-stakes poker player, primarily in private games with celebrities and billionaires. Outside of hardcore poker fans, the mainstream viewer probably had no idea who he was. The coincidental nature of his viral appearance — “Beardgate” — makes it seem almost planned in nature. The former US Navy Seal trainee now splits his time between the Hollywood Hills of Los Angeles, and the hustle and bustle high-stakes world of Las Vegas.

How Bilzerian became a household name

With almost 20 million Instagram followers, he’s one of the most engaged and shared “celebrities” on the platform … and he only stands to get bigger. Most of his posts are with bikini-clad models, either poolside, at exclusive clubs, on private jets, or at one of his cliffside mansions. He takes photos with Lamborghinis, in tanks, and Barbus trucks ticking over a lazy half-a-million in price. It’s safe to say Bilzerian is not your everyday American.

So what’s he got to do with poker?

How Bilzerian became a poker star

Its debatable if Bilzerian actually makes any of his money playing the game, or if he plays simply because he has the money. Some commentators believe it’s all part of the persona, that his poker style and high-stakes play are branding exercises to enhance his marketability. Whatever the reason, his history in poker stands as an interesting one. As the story goes, a near-broke Bilzerian, who was at the time studying business and criminology thanks to what he claims was a $6000-a-month veteran disability allowance, turned his final $700 into $10,000. That grew into more than $100,000, and soon he was making $90,000 a day (according to him).

He once booked himself into the most expensive room at a Californian resort for a high-stakes poker tournament, packing a briefcase with $100,000 in bank notes. While he turned a lot of heads, it’s said he played conservatively, and eventually left the table once he realised everyone was waiting for him to start betting big. As it turned out, while he was there to extract money from the “big” players, it was the players hoping to extract money from him.

These days, you’ll rarely (if ever) find him at a poker table, at least not publicly. He’s a frequent guest at nightclubs and pool parties in Las Vegas, but if you can’t make it to those you can live vicariously through his social media posts. His high-stakes poker style is known to stay exclusively behind closed doors at private poker games or online events, and it’s reported he’s told friends he makes at least half of his yearly earnings from such games.

Whether or not that still makes him a poker posterboy or just a rich guy who is good at poker is something you’ll have to decide. But while that’s up for debate, one thing’s for sure: there are few people in this world quite like Dan Bilzerian.