The poker table can often be its own little closed off, self-contained ecological system, populated by its own unique breed of punter. So let’s have a look at who’s who in the zoo: who are the seven sorts of poker players you always see at the tables? 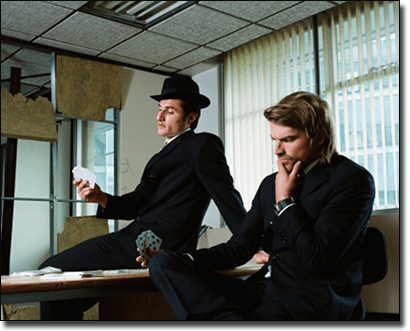 This guy is an enigma wrapped in a riddle. The prodigy usually boasts about their monumental IQ and their membership to MENSA, they can even rub their tummy and pat their head at the same time, too. They can calculate the odds of winning any given hand and have an uncanny ability to make their opponent’s cards seem transparent.

The prodigy has usually been banned from playing blackjack in every bricks and mortar casino in the country because they can naturally count cards. They can even recite pi to 16 decimal points.

After an entire session of playing with the prodigy, you will want to knee-cap them because they are too good. Usually the only way to beat them is through dumb luck, or to follow them back to the car park: the prodigy is usually a genius, not a body builder.

The virgin is brand spanking new to this fan-dangled poker caper. They will constantly be berated by the dealer for betting incorrectly. They will usually ask every one around them for advice and seem genuinely interested to listen to your war stories and years of poker experience.

Then, by some freak of nature, the virgin will inexplicably start winning hands. The virgin will seem as surprised as you are by this peculiar turn of events.

When playing against the virgin you must surrender to the fact that their wins are more arse than class. They are fluking their way through the game, but their blind luck is robbing you of your fortune. Poker players aren’t usually known as being a rock-star-looking mob, but every once in a while your table will be blessed with a sight for sore eyes: the elusive hot chick poker player.

No one is really sure whether the hot chick is actually a good player or not. This is despite the fact that she tends to win a lot, probably because every guy on the table is too busy living up to stereotypes and drooling over the presence of an actual female.

When you really think about it, you realise that half the time she wins hands off you, it’s either because you let her win in a misguided attempt to “impress” her or you were completely side-tracked when she leaned over in her low cut top to place her bet. Or you just suck.

The arsehole is an arsehole to everyone at the table, even the dealer and the hot chick, which is beyond comprehension. He tries to bully everyone at the table and intimidate them, they are full of offensive jokes, hurtful taunts and sexist comments. This is of course until the hot chick calls him out and announces to the table that he probably has a small “pickle”. The arsehole usually shuts up after that.

The guy who won’t shut up

This breed of poker player can usually be the most irksome and draining. You can never quite figure if this punter’s verbal diarrhea is a cunning ploy to distract you from your game or if they could simply talk under water with a gimp’s ball gag firmly secured.

Win, lose or fold this punter will keep on chatting to no one in particular on subjects ranging from the weather, every single hand of poker they have EVER played, politics, their latest bowel movement or why they’re not a racist, but…

They say God protects the drunk and stupid and the way this bloke seems to miraculously win every hand you can only assume he must be both.

The drunk plays with no apparent game plan or tactic. They bet like they have the nuts every hand, even though they clearly don’t, but tend to miraculously hit the nuts on the river.

You can pretty much guarantee the drunk will knock over at least one drink on the table and drip hot-dog remnants on the ground. 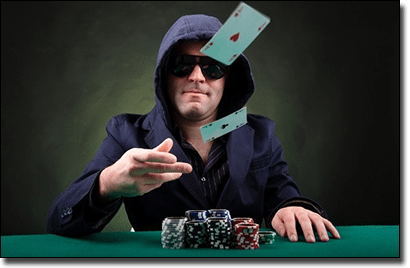 This try-hard punter will usually be dripping in poker regalia: the Poker Stars cap, the Full Tilt Poker shirt, the WSOP socks even the 888 Poker underpants.

They will attempt to regale the table with tale’s of every hand they ever lost by a bee’s dick, every time they were just one card off a royal flush.

They will boast about every online tournament they’ve ever won – often on Facebook’s Zynga – and how they are the king of the RSL poker circuit.

This punter will usually wear sunglasses at the table too. Not sure why. Are they afraid of hypnotism or something?